We are Langhorne Carpet Company

Established in 1930, and created by the same family since, Langhorne Carpets grace grand rooms in renowned residences and landmarks worldwide. Each work is a labor of love deftly defined by unequal quality and superior craftsmanship. 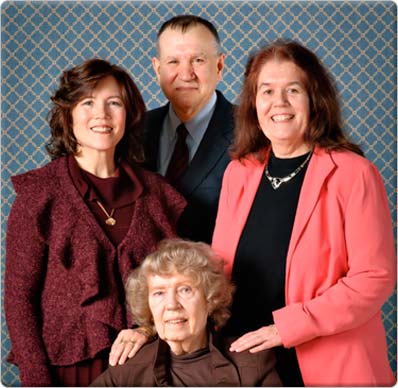 William Jr. and sister Winnifred Morrow continue the tradition of Langhorne Carpet Company family leadership that began in 1930 with the company’s founders and floor-covering visionaries John T. Kommer and Joseph K. Mackay. Their mother Winnifred remains an active participant in the business, tackling the toughest custom design assignments (she directed day-to-day operations during WWII). Today Langhorne is regarded as the finest and longest continuously operated Wilton carpet mill in the United States. Every one of its carpets is made in the original one-story, red brick mill in Penndel, Bucks County, just outside Philadelphia. It represents a uniquely American success story. The emphasis from the start was always on the highest quality in every phase of carpet. In 1930, auto titan Henry Ford owned custom looms he intended to use in making carpets for his cars. Ford, however, could not get the six “velvet” looms to function as intended. Langhorne Carpet Company purchased the lot and transported them by rail to the mill in Penndel. They would be invaluable in helping to meet the demand for carpet spurred by the retailing catalog giants Sears Roebuck and Montgomery Ward, as well as Woolworth’s. Langhorne Carpet has Henry Ford to thank for helping to launch the infrastructure of the company. However, it is the company’s dedication to superior craftsmanship and unparalleled raw materials (especially wool from Britain and New Zealand) that propelled Langhorne Carpet into national prominence. Langhorne’s carpet can be found in such iconic landmarks as the White House, American embassies, the Henry Ford Estate, historic houses of worship, and state houses. We are proud of every Langhorne carpet…a labor of love that we hope you, too, will make the foundation of your fine interior.


We are honored that you are considering Langhorne Carpet for your floor covering purchase. Before you make a final carpet buying decision, you might consider just some of the following reasons our carpet is regarded among home furnishing authorities worldwide as the foundation of fine interiors.

From classic to contemporary, running lines (in stock) to custom creations, there is no limit to the design possibilities for your Langhorne carpet. While many of our traditional designs can be traced to 18th century Europe, our exclusive line of lively Alex Papachristidis patterns is in demand. Working from a postage-size sample, we are even able to reproduce any heritage carpet. And we frequently collaborate with decorators on a wide range of original designs to suit individual tastes, color, border, and size requirements. This may include blending Peruvian alpaca—even luxurious silk—with our woolens.

It starts with the wool; every Langhorne Carpet is made from the highest quality wool from either New Zealand or the United Kingdom. Our wool buyers know that every yard we acquire must be the best available. There is simply no finer wool in the world, and even the best synthetic imitation cannot compare to our carpet when it comes to color, clarity, texture, feel, fit and finish. Langhorne Carpet is also a supporter of The Campaign for Wool, a global endeavor initiated by its patron, The Prince of Wales, in order to raise awareness among consumers about the unique, natural, renewable and biodegradable benefits offered by the fiber.

Langhorne carpet was “green” before it was fashionable. Unlike synthetics, which are petroleum based, Langhorne’s wool is 100% natural, renewable, and biodegradable (it is also naturally non-flammable).

Generations of Langhorne customers have come to appreciate our museum-quality carpet. It is long-wearing, retains its distinctive look and feel, and continually enhances a property’s value.

Made With Pride in the USA

We have refined the art of Wilton carpet making to a point where Langhorne carpets are sought out by buyers worldwide. Our Penndel mill is our first and only operating location. At Langhorne Carpet Company, we are proud to call Bucks County our home. We’re just a short ride from New York City, Princeton, New Jersey, and Philadelphia.