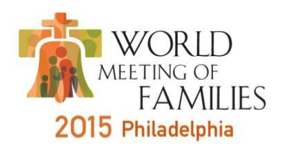 Philadelphia, PA (September 10, 2015) – The Archdiocese of Philadelphia and World Meeting of Families – Philadelphia 2015 today announced that Langhorne Carpet Company is weaving and will donate three custom carpets to be used during the visit of Pope Francis to Philadelphia on September 26 and 27.

Under its long established ‘Carpets of Caring®’ philanthropic program, the family-owned, 85-year-old Penndel, Bucks County-based textile company is weaving the Jacquard Wilton 100% organic wool carpets on its treasured Delaware County-manufactured “broad looms” for use during this historic occasion.

Based on Langhorne’s original “Medallion of Hope” design, the 75’ x 9’ carpet will be rolled out and used during the Holy Father’s arrival and departure at Atlantic Aviation and the other two room accent carpets will be used inside the rectory of the Cathedral Basilica of Saints Peter and Paul. Pope Francis will celebrate Mass in the Cathedral for the people of the Archdiocese of Philadelphia on September 26.

The Airport carpet, presented in Cardinal Red and Gothic Gold, features the decorative medallion border inspired by a section of the Cathedral Basilica’s stained glass windows. It requires nearly 191,000 yards of yarn (more than 100 miles) and will consist of more than one million individual woven loops. The carpets in the Cathedral rectory will feature the same signature medallion motif with the repeating six-inch diameter medallions.

“We are honored to represent the greater Philadelphia region and the global wool textile community in weaving these distinctive, uplifting carpets for the Papal visit,” said Mr. William H. Morrow, President of Langhorne Carpet Company. “We greatly appreciate the opportunity presented by the World Meeting of Families and the Archdiocese of Philadelphia to participate in this profoundly important event.”

About World Meetings of Families

Established in 1930 by the Morrow Family of Bucks County, Langhorne’s iconic mill – America’s oldest continuously operating Wilton weaver – has woven original design and reproduction carpets for many of the nation’s most historic structures, including the White House and Carpenter’s Hall. Langhorne is a Charter Member of the global ‘Campaign for Wool’, dedicated to a greener, sustainable planet, and the preservation of wool as a natural fiber-of-choice of choice in textiles and other vital everyday applications.