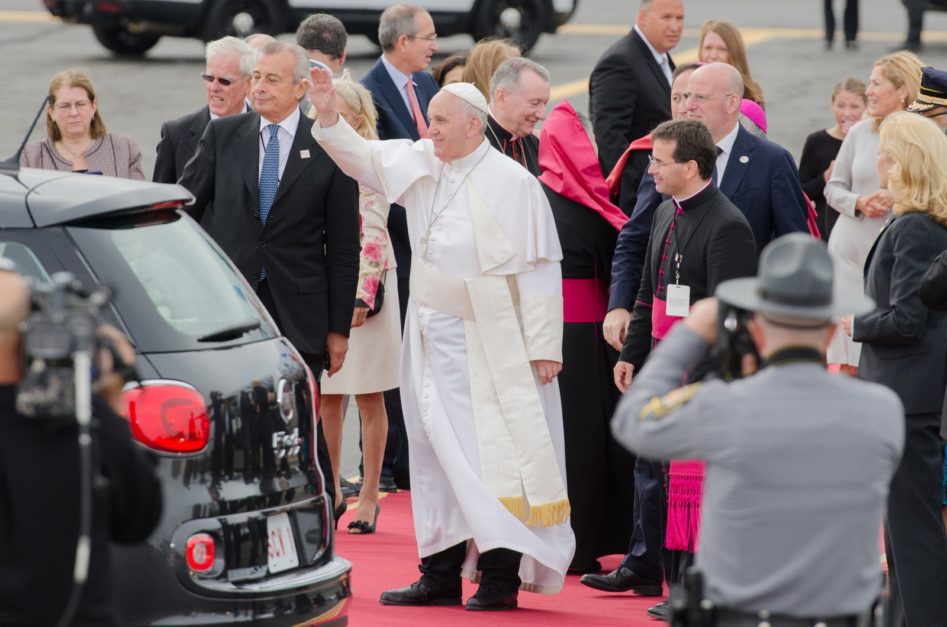 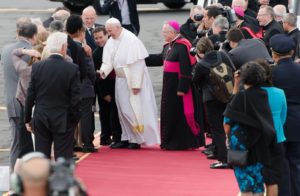 Suburban Philadelphia’s Langhorne Carpet Company, established in 1930, is honored to have designed, woven, and donated three wool carpets – including the captivating 9’ x 75’ ceremonial red carpet – for the Pope’s momentous Philadelphia visit on September 26-27.  Langhorne’s unique role in the Papal visit was a result of its close collaboration with the hosts Archdiocese of Philadelphia and the World Meeting of Families – Philadelphia 2015. All three carpets featured the mill’s iconic, one-of-a-kind “Medallions of Hope” design, greatly influenced by the contemplative and colorful stained glass panels in Philadelphia’s Cathedral Basilica of Saints. Peter and Paul. Besides the runner, the ‘Weave Team’ at the Jacquard Wilton mill loomed two loop pile, Evergreen and Gothic Gold accent carpets that were featured floor coverings in two rooms of the Rectory of the Cathedral during the Pope’s visit.

All three distinctive Langhorne carpets, which are now deemed historic objects and become the permanent property of the Archdiocese, were the subject of significant public and media attention before and during the Papal visit that attracted more than one million people to Philadelphia and a global television audience in the hundreds of millions. 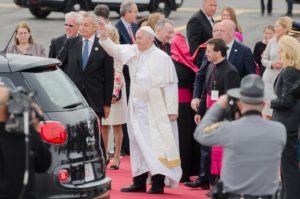 “We remain honored and humbled to have been a part of the Pope’s visit, and thrilled that the labor of love of our Weave Team members was featured on a world stage associated with a truly extraordinary, inspiration international leader,” explains William Morrow, President of Langhorne Carpet Company. “His message of peace, hope and harmony resonates with everyone and our participation exemplifies the importance of our ‘Carpets of Caring®’ program.” Morrow commented, “From a design standpoint, we were delighted that our partners permitted us to design outside the traditional, solid-red box of ceremonial runway carpets. The Gothic Gold medallion border was respectful, distinctive but not dominant.”

Langhorne’s role involved many firsts for the small custom weaver: the first carpet woven for a Pope, as well as the first time any of its carpets had been blessed. The Rev.  Robert Gross of Our Lady of Grace in Penndel, PA, and a neighbor of the mill, presided over the blessing ceremony that was attended by numerous government officials, friends and mill family members. And local and national media.

It was also the first time a Langhorne carpet received a lights-and-siren police escort. Penndel’s Police Chief led a UPS Hybrid Electric Vehicle (HEV), donated for the occasion by the global carrier, the 32 miles from the mill to the staging area at Philadelphia’s airport.

As a result of the Papal visit experience, it may not be long before Langhorne Carpet, long regarded as the foundation of fine interiors, is also known as the gold standard of red carpets.