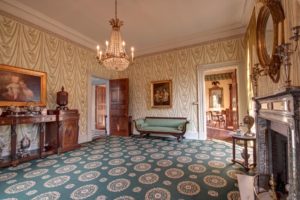 Langhorne Carpet Company is proud to have a place of honor inside one of the most prominent historic homes in the Society Hill section of Philadelphia. The circa 1786 Physick House belonged Dr. Phillip Syng Physick (1768-1837), the Father of American surgery, physician to James and Dolley Madison, Chief Justice John Marshall, Andrew Jackson and Benjamin Rush.

In the 18th century, the Physick House was the largest residence in the Commonwealth of Pennsylvania. Today, the attraction is open to the public and serves as an elegant example of both Empire and Federal styles—and of Dr. Physick’s less-than-elegant 19th-century surgical instruments. When lauded Society Hill-based interior designer and historic restoration expert Gail Caskey Winkler, PhD, FASID, asked Langhorne Carpets to create a carpet for the parlor in the Physick House, the Morrow family gladly accepted the opportunity to be part of the restoration.

Along with partner Roger W. Moss, PhD, Winkler quite literally wrote the book on the restoration of late 18th through 19th century American buildings. In order to recreate the Physick House’s interior authentically, she chose a carpet pattern that had graced the floor of the reception room in the Virginia State Capitol in Richmond, Virginia, a National Historical Landmark that housed the Virginia General Assembly, the oldest legislative body in the Western Hemisphere. For the Virginia State Capitol, Winkler recreated a grand woven carpet featuring large medallions in shades of gold and tan that repeat on a terracotta background. For the Physick House, she set those same medallions against an intense green background to match the home’s wallpaper and décor. The pattern is now part of Langhorne Carpets’ Capitol collection.

We encourage you to view both Langhorne Carpets’ contribution to—and all of—the Physick House at 321 South Fourth Street in Philadelphia. For information about visiting this and other Philadelphia landmarks, go to philalandmarks.org