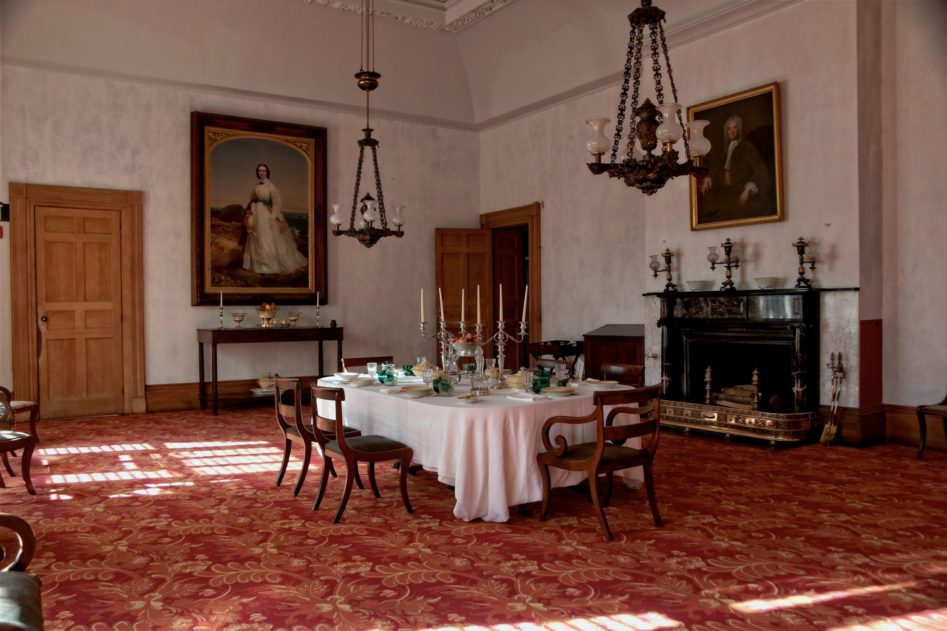 A National Historic Landmark and New York State Historic Site in Springfield, NY, eight miles north of Cooperstown, Hyde Hall is considered “one of the finest examples of the neoclassical country houses in the United States.” The agricultural estate was the project and prize of wealthy British-born landowner George Clarke (1768-1835). Clarke owned 120,000 acres in New York’s Leatherstocking Region and designed Hyde Hall on the bank of Otsego Lake with Albany architect Philip Hooker. The mansion, the estate’s centerpiece, was constructed from 1817 to 1835. Today, Hyde Hall resides within Glimmerglass State Park.

David Hunt chose Langhorne Carpet Company to recreate the Brussels looped pile carpet for the property’s dining room. Made from the finest worsted wool, a yarn used today almost exclusively in apparel, Brussels carpets were a 19th-century status symbol among America’s wealthiest citizens, including presidents and major landowners. According to Clarke’s scrupulously kept ledgers, in 1831 he purchased “122 linear yards of Brussels body carpet, along with 24 yards of Brussels border carpet from the showroom of Lowe & Connah in New York City for the sum of $308.00. A hefty amount for the period,” said Hunt.

The carpet—which, Hunt said, may well be one of the first examples Wilton carpet woven in the United States—remained in the dining room through the end of the 19th century. As for the two tuffets? They not only survive—they also remain covered in the original textile.

This existence of these original tuffets for nearly two centuries, said Hunt, is both incredibly rare and fortuitous. “Having a documented portion of the original carpet, intact 186 years after manufacture, is, for the textile historian, a gold mine of information. Although the border portion of the design remains most visible, having the ability to document and verify the yarn quality, sett (pattern) of the weave and most importantly the original colors is huge.”

Hunt “dissected” the tuffets to reveal the yarn that, like in all Wilton weaves, is buried beneath the textile’s back, unexposed to sunlight, air, or cleaning agents. When he did, he found the carpet’s original colors and pattern. From there, he and Langhorne used a black-and-white photograph of the original carpet to create a botanical pattern for the field that would, he said, “honor the style of the border.”

He then turned over the work to Langhorne, to create the patterns, match the dye colors, and weave the carpets on narrow looms much like the ones used 200 years ago. Langhorne, he added, is the only mill in the United States—and one of very few in the entire world—capable of doing such a job.

“Langhorne has this wonderful capability to do all sorts of different things. I don’t think a lot of people understand that option is out there, and it’s a lot easier than you think to do it,” he said. What’s more, “They’re real people, working people—the folks on the loom, the weavers, the folks in the office: Except for the clothing, they’re the same type of people you would have found in a mill 200 years ago. It takes special people to do this, and that’s Langhorne.”