Penndel, Pennsylvania (May 4, 2018) – Langhorne Carpet Company (www.langhornecarpets.com), which has been weaving some of the world’s finest Wilton Jacquard wool custom carpets over the past 87 years, is now incorporating for the first time 21st century 3D printing technology on one of its timeless 20th century looms.

Langhorne considered 3D printing when the mill was weighing the replacement of one of its loom’s original equipment. Wooden cylinders crafted from extremely rare and environmentally sensitive Cuban mahogany form the five-sided ‘master cylinder’ at the heart of the carpet-weaving process. Decks of connected Jacquard punch cards that contain the ‘program’ of the carpet’s intricate design scheme feed into the cylinders. Prior to the advent of 3D printing, Langhorne would have had limited replacement options for these essential pieces of equipment. Without custom, 3D-printed replacement parts, the family-run mill would have had to  purchase a new cylinder via custom order, or seek out a refurbished one in excellent condition. Either option would typically cost the mill an exorbitant amount of time — and money.

“Our looms will run forever, but like any classic, they eventually require replacement parts,” said Langhorne President William H. Morrow. “It was Gerald (Jerry) Bell, our enterprising operations manager, who suggested we explore 3D printing. He told us to contact ProtoCAM, also based in Pennsylvania. Honestly, I was a little hesitant because I did not realize 3D printing was such a viable alternative — operationally and environmentally — for our very special machinery application.” He added, “We are confident that the use of 3D printed cylinders from ProtoCAM, cylinders made with HP printers, will be another milestone for our remarkable mill — to the benefit of our worldwide customers.” 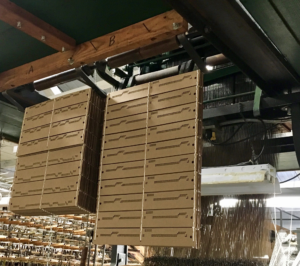 Punch cards as They’re Fed Into the Cylinder-reader

Mr. Butler said he was impressed that ProtoCAM did not just reverse engineer the cylinder; the company worked with him to improve upon the exceptional design. “For example, we substituted vents for the drilled holes (top picture: 3D printed cylinder and original; bottom picture: punch cards as they’re fed into the cylinder-reader) and that will likely enhance even more the weaving process (the cylinder acts like a ‘card reader’ of the Jacquards). He added, “Another advantage is that we can easily clone the 3D replacement part, if necessary, for our other looms — and at a reduced cost, since all the basic engineering is now completed.”

The HP 3D group at the Additive Manufacturing Users Group (AMUG) annual conference in St. Louis (April 8-12) will highlight the Langhorne-ProtoCAM experience, including the use of the HP Multi Jet Fusion (MJF).